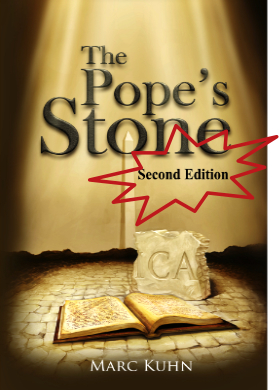 Finally! I get to check off one of the older items on my To-Do List! Eight years ago I published my first attempt at writing an adult novel. It was titled THE POPE’S STONE and while any writer’s first novel could be considered a practice piece, I was more than happy with my efforts. Certainly any professional writer would rip it to shreds, but I was pleased with myself since up until that point I had written only a few children’s books which were a lot shorter and a lot less work.

“POPE” is a historical novel which, I think, involves a lot more effort than a piece of straight fiction. The latter is a matter of dumping your mind and guts out onto the pages. A historical novel lets you take some fictional liberties with history if that helps the story move along, but you better have most of the real stuff spot on or you blow your credibility. I spent an enormous amount of time making sure the historical events and locations in POPE were accurate.

So, what was the big “to-do” that had to be done with THE POPE’S STONE? Well, the one point of criticism that stood out was that readers found some of the chapters too predictable. They also had some difficulty keeping up with time and place. The story involves two descendants of a family who live a century apart, yet their lives and all the events and experiences they have parallel each other. To emphasize this, I originally flipped-flopped the time and location chapter-by-chapter. So when you read about a particular circumstance of descendant A, you knew descendant B would experience a similar scenario in the chapter that immediately followed. This sounded like an approachable model to tell the story but readers found it otherwise.

So, what to do? After a few years of procrastination I got to thinking the only way to answer the criticism was to break the book into two parts, one for the earlier descendant and part II for the latter. This did not reduce the concept of how the two lives mirrored each other, but the separation of chapters made the story less repetitive. So I set about maneuvering the chapters accordingly and made adjustments to the text when and where they were necessary.

That’s my story and this time I’m stickin’ to it. THE POPE’S STONE, Second Edition is available via amazon.com.  Here’s the link: https://www.amazon.com/dp/B08FP7Q6CV I

Or, is necessary, search “The Pope’s Stone, Second Edition, Kuhn.”

I am a retired radio exec. I've worked at major stations in Philadelphia, Washington, D.C. and Miami. That was then. This is now: I've published seven books and this blog thingy. Need to know more? Really? Okay, I bare/bear all at http://marckuhn.com The other links are for the websites of each of the books I've written. I've been busy! Hope you'll stop by and check them out. Thanks for your interest!
View all posts by Marc Kuhn →
This entry was posted in history, Indie Publishing, self-publishing, Uncategorized, WRITING and tagged books, Civil War, history, Journals, Pope, Single mom, Vietnam, Washington Monument, writing, writing fiction, young love. Bookmark the permalink.