It is just about three months since we moved into our new home.  I think Rosemarie and

I are finally feeling settled in, despite a lengthy list of tasks still waiting to be done.  But the word, “home” has become the accepted term to describe where we live now and not where we lived before.  That concept, after 23 years in the same house, has been a difficult one to maneuver in my mind.

There were a few things we were willing give up when we were shopping for a new house.  The stairs were the highest on the list, while losing the canal passing along the outer edge of our backyard …well, that would be sorely missed given all the wildlife it regularly presented  for our viewing pleasure.  Perhaps we could find a new home with a similar waterway.  That, unfortunately, didn’t happen.  But as for having a magical menagerie on our doorstep, we lucked out. 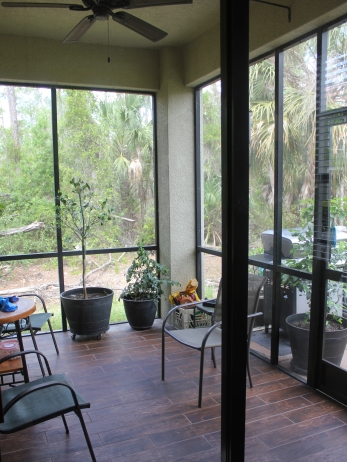 We live in the end unit of a series of coach homes which is a modern-day way of saying row house.  I should know; I grew up in a post WWII community in the middle of a row of 40 joined homes and that was one side of a block and the blocks ran as far as far as the eye could see.  Being on the end, we are blessed with extra windows. There are seven large windows in the living room alone.  And what is the view outside?  Tropical woods!  On the left is the setting looking out from the patio–ah, in this house it’s called a lanai.

The entire back of the house abuts a state preserve. This is an area that represents the State’s natural environment, including its geographical and botanical samplings.  You can count on the area to be around and undisturbed forever, hence preserve.  What’s more, don’t mess with it! 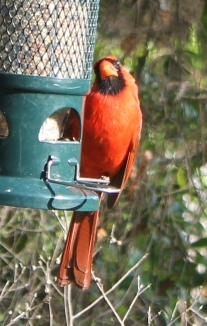 So, while we missed out on having a canal, the preserve, so far, has introduced us to a whole new collection of birdlife, several rabbits, a new species of ducks and one raccoon.  And  no, not a snake in sight.

I am a retired radio exec. I've worked at major stations in Philadelphia, Washington, D.C. and Miami. That was then. This is now: I've published seven books and this blog thingy. Need to know more? Really? Okay, I bare/bear all at http://marckuhn.com The other links are for the websites of each of the books I've written. I've been busy! Hope you'll stop by and check them out. Thanks for your interest!
View all posts by Marc Kuhn →
This entry was posted in animal life, environment, Family, home, lifestyle, moving and tagged ¸wildlife, ducks, home, moving, racoon341, view, woodland, woods. Bookmark the permalink.

1 Response to SETTLING IN