Bam!  Just like that, half the year is gone and it’s already July 4th.  I do not remember most July 4ths.  After all, they are reasonably redundant.  At many of them I am sure I attended a picnic or backyard BBQ of some sort. Numerous others involved going to see fireworks somewhere.  But most July 4ths are just a blank, except for a few.

Judging from where I was, the very first one I remember occurred sometime when I was around 4 or 5.  Temple University’s original football stadium was located about six blocks from my home.

That’s a picture of how it looked back then.  It’s where you went every year to watch the July 4th fireworks.  The stadium would fill in during the early evening while several local college and high school bands would march and perform on the field. Other forms of entertainment were also featured. The ground display fireworks began just as it was beginning to get dark, followed by the big boomers as night set in.  That was the routine I remember–pretty basic even at many July 4th celebrations today. The only reason I  remember this first 4th is because I was not familiar with a big fireworks display.  It scared the hell out of me.  I would up screaming through the entire performance, mostly from underneath the bench my family was seated on.  Well, I must have survived the bombs bursting in air because I do remember a few more 4ths at Temple Stadium when I sat on top of the bench..

One of the coolest fireworks displays I watched was back in the mid 1970s when Rosemarie and I were visiting some friends in Bradford, Pennsylvania.  Bradford is a little mountain town up in the northwest corner of Pennsylvania, just down the road a piece from Erie.

Bradford is the home of the Zippo lighter company.  When smoking was “in” back over 50 years ago, just about every macho man smoked and he, of course, packed fire to keep the smoke going: a Zippo lighter. What is interesting is that Zippo lighters run a good $40 or more nowadays and the company has transitioned the lighter into an incredible art form. Check ’em out at zippo.com and you’ll feel inadequate using a bic to light the family grill this 4th.

Anyway, I digress. Bradford sits down in a valley and at the end of its main street is a pretty sizeable mountain.  On July 4th when I was there, everyone in town showed up at the end of that street as it got dark.  The fireworks were shot off from the mountain top and they showered down the side making a pretty impressive show.

Next is Juneau, Alaska. We were on a cruise and we had all day July 4th to spend in Juneau.  We left long before the fireworks, but we did get to see the town’s annual home-brew July 4th parade.  It was one of the most remarkable parades I’ve ever watched. All the participating clubs, bands, groups, gaggles, whatever, went out of their way to do something creative, usually wacky crazy creative.  It’s the best reality parade in the country, no doubt.  It was like an episode out of the old TV show, Northern Exposure. 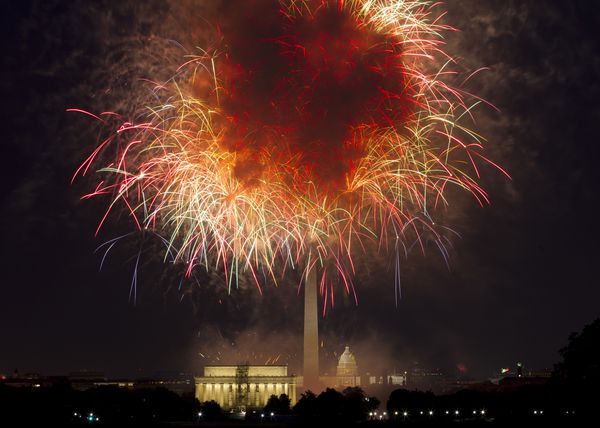 The most memorable July 4th for me was the Bicentennial 4th at the Washington Monument. At the time, I worked for a really popular radio station in D.C. and we were always doing innovative (translation: are you nuts?! kind of activities).  So at one of our weekly planning meetings it was announced that the July 4th fireworks for the Bicentennial would be like none other before:  bigger, longer, louder, etc.  But the big deal was the radio station had agreed to accompany the fireworks with a broadcast soundtrack of patriotic music.  The fireworks and the music would be performed perfectly in sync with each other. This had never been done before. The station had been given a descriptive, second-by-second rundown of the fireworks display.  It showed where all the little sizzles would be, when the big bangs would explode and so on.  All the station had to do was put the music together so that its “ups and downs” played along with those of the fireworks. So guess who was given the assignment to put this all together…..uh huh…me.  I worked day and night selecting music and timing it out to ride along–perfectly in sync, mind you–with the timed-out script the fireworks company had supplied.  I don’t have to tell you, I worked on this project full-time for the last half of June.  Meanwhile, the station promoted the event 24/7 for two weeks leading up the 4th, telling listeners to bring their radios to the fireworks display at the monument so they could listen as the music accompanied the fireworks.

It took me forever to get the music to match up with the script.  Of course, there was no rehearsal, no practice, no way at all to know in advance if what I worked out in the studio would actually time out live at the Monument.  Well, it did….for about the first ten minutes and then the two elements slowly began to wander further and further out of sync.  I think the music’s big finale came about a full minute early. Given how spectacular the fireworks’ grand finale was, I don’t think anyone noticed the music had run out long before….except me, of course.  It was one of the zanier assignments in my radio career and I am happy no one else–that I know of–has ever had to attempt it again.

Nowadays, I haven’t left the house on July 4th for many years.  In fact, the holiday has become a bit annoying because there are a few folks in my neighborhood who like loud fireworks and they begin setting them off just after dinner and continue them for the rest of the night–past midnight!  Every year as the 4th approaches, I begin hoping they have moved.   Then again,  I suppose it’s only once a year so I should learn to live with it.  I could attempt to be really nice about it…maybe even get them a zippo lighter.

I am a retired radio exec. I've worked at major stations in Philadelphia, Washington, D.C. and Miami. That was then. This is now: I've published seven books and this blog thingy. Need to know more? Really? Okay, I bare/bear all at http://marckuhn.com The other links are for the websites of each of the books I've written. I've been busy! Hope you'll stop by and check them out. Thanks for your interest!
View all posts by Marc Kuhn →
This entry was posted in entertainment, history, holiday, lifestyle, Recreation, travel, whimsy and tagged celebration, Declaration of Indepdendence, fireworks, holiday, July 4th, marching bands, music, parade, patriatism, Picnics, usa. Bookmark the permalink.