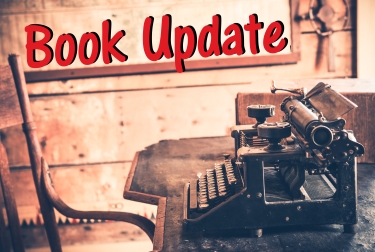 As promised to those fellow independent writers and others interested, here is another update on what seems to have become my longest struggle in my struggling writer career…will this book ever be born?

My current project—my 11thbook and probably the last one I write—is still in the works.  I’ve written about it before here on Marc’s Blog.  It’s been the most difficult writing task I’ve ever had.  It took me over a year to get it started because I was having problems with the story.  The idea was there and well defined…I just couldn’t seem to put it into words.  Finally, I gave up waiting and simply forced myself to sit down and start writing. Today, it’s a little over half done, despite my recently hitting yet another block.  I am working my way through it…slowly.  It is hard to explain if you haven’t had the experience of writing a book, but as a project, it seems to take over your entire mind and hold it prisoner until you get it done.  You know it’s taken over your life when it begins invading your activities.  Case in point…

Two weeks ago I attended a wedding during which there were readings done by several friends and relatives of the bride and groom.  One reading just about knocked me off my chair.  If I were to write a paragraph about the overall concept of the book I am writing, I could not have said it any better than the first reading at this wedding.  It was from The Amber Spyglass which is the third book in Philip Pullman’s trilogy that includes The Golden Compass (popular movie in 2007) and The Subtle Knife.  Here’s the quote read at the wedding:

“I will love you forever, whatever happens. Till I die and after I die, and when I find my way out of the land of the dead, I’ll drift about forever, all my atoms, till I find you again…I’ll be looking for you Will, every moment, every single moment. And when we do find each other again, we’ll cling together so tight that nothing and no one’ll ever tear us apart. Every atom of me and every atom of you…We’ll live in birds and flowers and dragonflies and pine trees and in clouds and in those little specks of light you see floating in sunbeams…And when they use our atoms to make new lives, they won’t just be able to take one, they’ll have to take two, one of you and one of me, we’ll be joined so tight…”

Hearing that, it sort of inspired me to get home and get workin’ again.  I have only about 150 pages to go but that’s enough of a challenge for the next few weeks if my brain doesn’t cave on me. This is my first novel that is not a mystery and no one gets murdered either.  Maybe that’s why it’s been so much harder to write.  It’s about the nature of true love, something I should at least be familiar with as I approach my 51st wedding anniversary…but it’s not that easy.

I have a tentative title and a tentative book cover and, as usual, its debut is always on this blog…

I am a retired radio exec. I've worked at major stations in Philadelphia, Washington, D.C. and Miami. That was then. This is now: I've published seven books and this blog thingy. Need to know more? Really? Okay, I bare/bear all at http://marckuhn.com The other links are for the websites of each of the books I've written. I've been busy! Hope you'll stop by and check them out. Thanks for your interest!
View all posts by Marc Kuhn →
This entry was posted in creativity, self-publishing, WRITING and tagged author, book, communications, Draft, inde-author, manuscript, plot, publishing, script, self-publishing, Status Report, update, writer, writer's block, writing. Bookmark the permalink.