DARE I SAY IT? …Ice Cream

There was one place I worked for a few years that had nothing decent for lunch nearby. I usually didn’t get lunch anyway because the job was demanding and

taking time to get in the car and drive someplace was just too time consuming. I got in the habit of walking across the street where there was a small, poorly stocked convenience store that had at least one thing I’d eat: Häagen-Dazs ice cream. So I’d buy a pint and take it back to the office and eat it while I got back to work. That was lunch…often! I wonder what my cholesterol levels were back then.

When I was a kid, ice cream was sold in several ways that don’t exist anymore. Loose was one way. By that I mean, you’d go to the corner “Luncheonette” that sold ice cream cones.  There, you could order a loose pint of whatever flavor you wanted. It would then be spooned out of a five gallon round cardboard tub much like ice cream is sold at

cone stores today.  The clerk would use a wide, flat spade to spoon the ice cream into a paper tray like the one pictured and then weigh it on a scale. Then a piece of light wax paper was smooshed on top of the ice cream and the whole thing then went into a brown paper bag and off you went—fast—so you’d get home before it melted.

Later, packaged ice cream came in square (pint) or large rectangular (half-gallon)
bricks wrapped in thin cardboard. The ends had locking “tongues” like a bakery box. In college a friend and I would buy one of these big bricks of ice cream, take it back home, open all the sides and lay them flat on the desk. Then we’d sit there with spoon in hand and work our way through the brick until it was finished. It was basically two pints each. You didn’t want much after you polished that off…at least for an hour.

Those Carvel cakes (the ones that cost more than the birthday present your bought) used to originate from drive-in type stores or those in strip shopping centers. The cakes were not the main item then. Like Dairy Queen, cones of soft ice cream were the attraction at Carvel back then. They also had an incredible chocolate “log” in the display freezer. This was a foot-long round concoction of cake and ice cream made to look like a log. Three big maraschino cherries on top if I remember right. Forget about the “whale” Carvel sold…the log was to die for 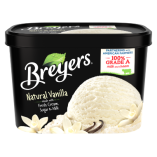 Breyers, when I was young, was the favorite brand and it may still be yours. Not mine. The company was sold years ago. I think Sealtest first bought it. Despite the company saying the ice cream would never change, that concept melted away faster than some of the Breyers flavors do. That’s because there is more air left in the ice cream, plus the amount of butterfat in some flavors no longer qualifies the product to be called “ice cream.”  Note the label on many Breyers packages now reads “frozen dairy dessert.”

One of the biggest developments in the ice cream business over the past 50 years was the introduction of Ben & Jerry’s. This is a high-end, high-quality ice cream like none before. The company gave their flavors quirky names and overstocked them with big chunks of fruits, nuts, chocolate pieces, etc.  Then  it had the audacity to become socially (human) and cow (animal) conscious. They share their wealth with those who need it and don’t use cream from deprived, manipulated, substance infiltrated cows

or corrupt and mismanaged dairy farms. Ben and Jerry took an ice cream making course at Penn State and then opened a store in a deserted gas station.   The rest, as they say…is history, although Ben & Jerry’s was sold a bunch of years ago and, so far, there haven’t been any notable changes in concept or quality. If you’ve never had Chunky Monkey, I suggest you need to run out right now and get some.

Lately there has been an explosion of new brands showing up in the freezer display at the supermarket, all competing for your attention and your stomach. Ice cream is much like pizza. Everyone has their own particular flavor and brand that they favor. Me? I’m not fussy. Even bad ice cream will most times beat rice pudding or tapioca…does anybody even make that stuff anymore?

I am a retired radio exec. I've worked at major stations in Philadelphia, Washington, D.C. and Miami. That was then. This is now: I've published seven books and this blog thingy. Need to know more? Really? Okay, I bare/bear all at http://marckuhn.com The other links are for the websites of each of the books I've written. I've been busy! Hope you'll stop by and check them out. Thanks for your interest!
View all posts by Marc Kuhn →
This entry was posted in diet, food, history and tagged Ben & Jerry, Breyers, Carvel, dairy, Dairy Queen, dessert, Food History, Haagen Dazs, ice cream, nostalgia. Bookmark the permalink.