Back To The Birds 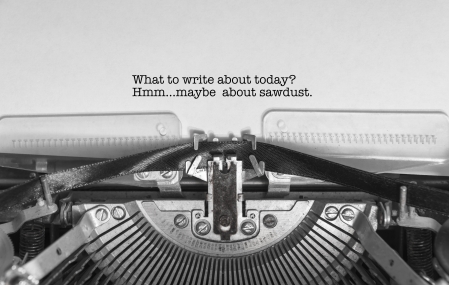 I have to admit, I was surprised at the reaction—or lack thereof—to my last posting regarding the shootings at Marjory Stoneman Douglas High School and the follow-up statement by Florida Senator Marco Rubio. I rarely get into politics and big fight issues like gun control on my blog, but I was motivated to do so by two factors:  first, the horrendous tragedy at the Parkland school this time was really really close to home and, second, Marco Rubio’s comments were hideous.

The response after four days was one “like” and one supportive comment. I’ve posted pictures of birds that got much more response. That says something about my writing or my readers. I am not sure which or if it’s a combo of both. It does, however, give me pause as to whether or not I should find something else to do with my time other than writing.

Come to think of it, according to the stats kept by my blog publisher, one of the most popular postings on my blog was published over five years ago. Guess what it was about? Yep….birds. So here’s a redo.  Oh, and oddly enough, the last sentence was not added on…it’s actually how the original piece ended…..and one spoiler note for your attention…nobody gets shot.

THIS BLOG’S FOR THE BIRDS…Posted onJanuary 30, 2013by Marc Kuhn

I never stop appreciating the little postage-stamp size of property my house sits on here in South Florida.  There is enough wildlife in my little backyard to keep a naturalist happy for years.  There are many people who have no backyard at all, and many more who have one with only views of trash cans and a parking lot.  My camera is always nearby and today I will share some of my pictures from my backyard and you will soon see why I am blessed.  BTW, you may already know this, but if you click on each picture they should grow nice and large.

About thirty feet from the small patio along the back of my house there is a canal.  There are many canals in the area, part of an irrigation system built back in the 1940’s, I believe.  I’m told they all draw water from a huge lake in the middle of the state in addition to sources all along the famous Florida Everglades.  The canal has more to offer than I ever imagined when we first moved in.  Lots more.  This waterway environment draws hundreds of exotic birds and other creatures.  Yes, we actually do have an occasional alligator swim by, but not often.  In 16 years I’ve seen only two.

The most prevalent species in the neighborhood is the Muscovy duck.  They are easily identified by the splattering of red wart-like “carbuncles” that surround their beaks and eyes.  They spend more time on land than in the water, especially if you choose to give them bread.  Then, they will hang around forever.  This is not advisable unless you like having to clean off the patio every day.  There are other smaller, brownish ducks that I haven’t learned about yet.  There are no Mallards in this area.  Male Muscovy ducks are quite frisky and their mating process is incestuous and barbaric.  The male will insist on getting on top of the female, preferably in the water, and then he will poke her head down under the water and keep it there until he is done with her.  She, meanwhile, struggles to free herself.  I always fear the female will drown….but I don’t suppose ducks drown. 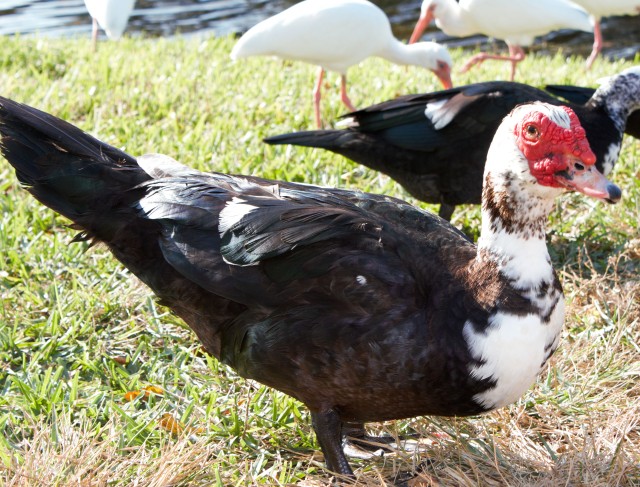 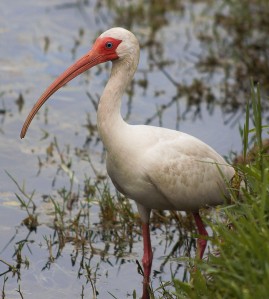 We have a lot of Ibis, famous around here as the mascot for the University of Miami Hurricanes.  They are fun to watch eat since it’s a long way from their beak’s tip to inside their throat.  You rarely get one Ibis at a time…one may arrive, but look for another twenty or so not far behind.  Ibis, right. 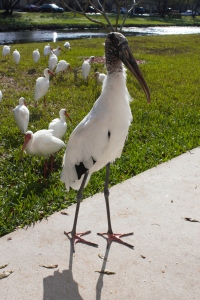 The Wood Stork is one of the larger birds we see often.  They will smack their beaks together and it actually sounds like two pieces of wood slapping.  They are quite brazen.  For several weeks we had one come up and peck on the door every morning wanting his breakfast.  We’ve had Ibis do the same.  The Wood Storks stand a couple feet tall.  I don’t think they deliver babies though. 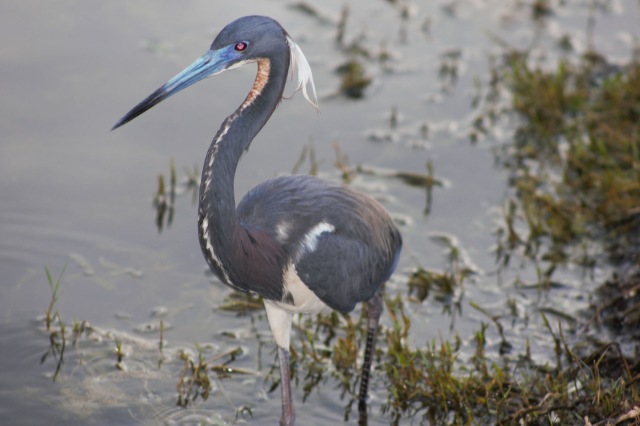 We have a lot of Tri-colored Herons (above).  They are not very large, much smaller than the big Blue Herons that grace us with their majesty only once in awhile. 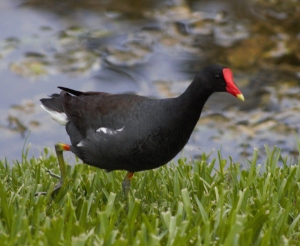 Moorhens (left) are another small breed that usually consist of two parents and 4-5 little ones.  They are black except for a very bring red “wedge” atop their beak and between their eyes.  It looks like a bright shiny slab of red plastic. 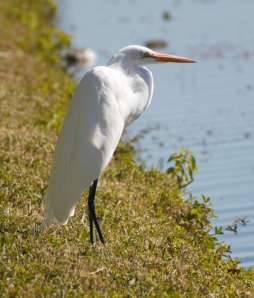 The most majestic bird we commonly have is the Great Egret (right).  These are the traditional Florida white birds often seen in tourist pictures and at art shops.  They are very skittish, unless there are baby ducks in the area.  Then they have no trouble zooming right in and scoffing one up for lunch.  It is brutal to watch—and hear—since the little one is carried off still chirping loudly while held tightly in the Egret’s beak.  This is why the Muscovy ducks have so many ducklings.  The attrition rates is crazy.  It is not uncommon to see a new mother with a dozen babies on Monday and by Friday, after the Great Egrets have spotted them, she is lucky to have one or two left. 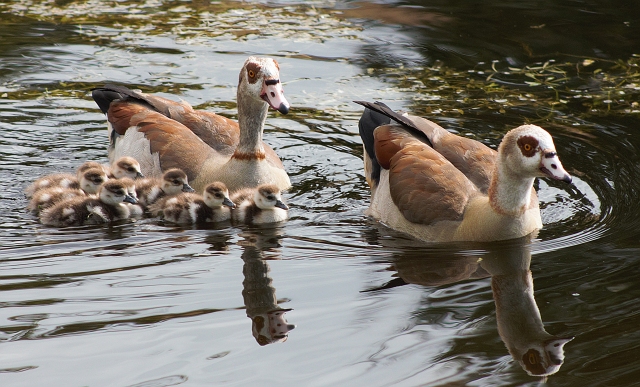 And then, there is the Egyptian Goose (above).  These usually travel in pairs.  Our pair just had babies two weeks ago.  Some have not made it, but the Geese are much more aggressive at fending off predators than the Muscovy ducks.  They are beautiful birds with brown and beige tones with dark green and bright white feathers underneath.  They have distinct circles around their eyes and a black smudge on their chest.  The male makes a hissing sound.  The female, however, honks loudly and repetitively for hours and hours until you want to throw a stone at her and scare her off. 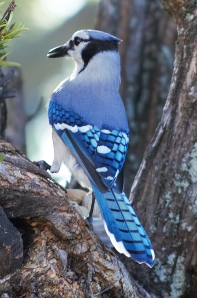 A little less tropical and pretty much common in many locations is the Blue Jay (right).  I put peanuts out for the squirrels and the Blue Jays will beat them to most of the supply.  They are beautiful birds but a bit noisy and nasty. 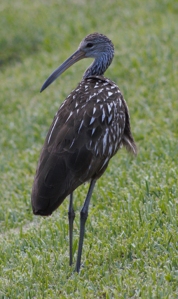 The Limpkin (left) is another noisy bird.  They usually travel by two’s.  When you see only one, it won’t be long before he starts calling for his mate.  He wails outrageously loud and I’m sure it can be heard a good mile or more away.  I don’t think his mate likes it, however, because she always shows up rather quickly, maybe just to shut him up.

See, I told you I am blessed.  These are just a handful of all the creatures just out my back door.  And, they stop by regularly for me to see.  I don’t need a ticket and the popcorn is only a few feet away.  I thought it would be a nice break from my usual ranting to have a blog that’s for the birds.   I have come to appreciate them a lot.  I am grateful I have had the opportunity to witness their little lives coming and going in such a rudimentary fashion.  They bring a  cherished tranquility each day that offsets much of the human-made havoc that unfolds in the newscast every evening.

SURVIVAL OF THE DUCKEST!In “WHATEVER!”

SQUIRRELED AWAY IN MY BACKYARDIn “WHATEVER!”

I am a retired radio exec. I’ve worked at major stations in Philadelphia, Washington, D.C. and Miami. That was then. This is now: I’ve published seven books and this blog thingy. Need to know more? Really? Okay, I bare/bear all at http://marckuhn.com The other links are for the websites of each of the books I’ve written. I’ve been busy! Hope you’ll stop by and check them out. Thanks for your interest!

I am a retired radio exec. I've worked at major stations in Philadelphia, Washington, D.C. and Miami. That was then. This is now: I've published seven books and this blog thingy. Need to know more? Really? Okay, I bare/bear all at http://marckuhn.com The other links are for the websites of each of the books I've written. I've been busy! Hope you'll stop by and check them out. Thanks for your interest!
View all posts by Marc Kuhn →
This entry was posted in animal life, communication, creativity, politics, WRITING and tagged Birds, blogging, BLUEJAY, ducks, egret, geese, gun control, guns, Heron, Ibis, LIMPKIN, Marco Rubio, MOORHEN, nature, politics, School Shootings, STORK, TOPICS, writng. Bookmark the permalink.

3 Responses to Back To The Birds