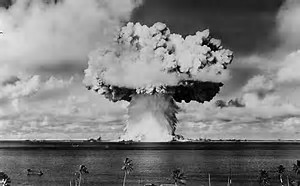 It’s been some time since I last settled my butt into my thinking chair on the back patio and actually did some thinking.  I’m not sure it was as much thinking as it was worrying that I wound up doing.  I can’t believe it, but I was worrying about the state of the world, given the current tensions that exist among the United States, Russia, China and North Korea.  The pot has definitely been stirred and I don’t remember people ever being this actively worried about “the bomb” since the Cuban missile crisis in 1962.

I guess I should stop and back up a wee bit since many of you were not around back then.  While children my age—we’re talking elementary school, 1950s—weren’t consumed every waking minute by visions of a great blinding flash of intense white light which served a warning for a huge mushroom cloud that followed, not to mention the complete obliteration of life as we knew it.  No, all that was not constantly on our minds, but we were damn well aware of it and every week we had to  practice what to do about it  should it ever occur.

We watched movies (not videos) about air raid sirens, something older British kids were already well schooled in.  We knew where the nearest shelter was located, or otherwise knew to head for the basements.  If we were at school, we were to crawl under our desks where we would be sheltered and safe until the all-clear sirens were sounded…or not.*

Bomb shelters were the latest weekend warrior project for many a father.  If the house couldn’t convert the basement, a shelter would have to be buried in the backyard.   You could buy a complete set of plans or hire a company to build it.  Moms, meanwhile, would be handed a list of supplies to stock the new family addition.  Once all these kinds of things were in place, we had a renewed sense of security. Bully Nikita Khrushchev wasn’t so tough after all.

So, moving ahead one lifetime—mine!—as I sat in my thinking chair, I figured all this new world tension could spawn a resurgence of all that stuff we were taught as a kid…only now we are senior citizens.  Things would have to be altered and adapted. Some examples I thought about:

First, we are no longer in school.  So there is no school desk to hide under.  What to do?  Obviously, we’d be instructed to turn our walkers over onto their sides, get down on the floor and crawl inside one end and, when fully under the walker, assume the fetal position.  Those in wheelchairs would do likewise, placing their chairs in the traditional wheels-up position.  Imagine, however, what would happen after the all-clear signal was given.  There would be a nightmare number of people pressing their “I on the floor and I can’t get up” buttons, followed by gridlock on the highways as millions of ambulances responded to the flood of panic button signals.

I am not even sure there are air raid sirens mounted anywhere on our streets these days.  Besides, we would have to be reminded of how many blasts meant exactly what and whether or not the comforting all-clear siren was the same…and exactly what was that?  I suppose this would not be a big problem given that most all seniors carry a cell phone nowadays.  Much like the Amber and Silver alerts we receive on our phones, I am sure we could be sent a Bomb alert too.

I am also sure that social media would play a huge roll in warning us that complete annihilation was coming.  Tweets would be most effective since you can say “Holy Crap, the end is near” and still have space for a personal thought.  Linkedin could immediately shift from distributing resumes to obits and you could invite others to meet you at Starbucks on the other side, wherever that is. Pinterest would showcase all the iconic pictures of bomb droppings, especially the shots of refugees wandering the globe looking for someone to invite them in. And Facebook would go nuts.  Can you imagine all the pictures posted, all the politicalizing, all the sudden friending and unfriending now that the end was near. Oh the humanity!

And what about bomb shelters in the 21st Century?  I just know my phone would light up with a gazillion robocalls soliciting my good money in exchange for an easy-to-build-fully-stocked shelter in the color and floor treatment of my choice, followed by the dates of their special “blow-out” sale.

Well, these were all the things that crossed my mind while sitting in my thinking chair thinking about the end of the world.  It was all starting to cause me a lot of anxiety. Old feelings of fearing the bomb were suddenly coming back to me. Visions of Edward R . Murrow and Walter Cronkite appeared out of nowhere, not even the television—they were just there floating in the air, reporting on horrific cold war incidents.

I heard boom! after boom! and even felt the floor shake and I saw the blackboards cracking.  My God, all this had more influence on me as a young child than I ever remembered.  And now as a senior citizen it was all coming back to me, every scary goose-bumpy moment of it.  I did the only thing I could do. I got up out of my thinking chair, went into the house, ran upstairs and crawled under my desk.  Ahhh, safe again.

*BTW, comedian Lewis Black does a much better spin on the outrageousness kids went through during the cold war years. Here is a link to his routine. It’s about a minute in when he begins talking about being instructed to hide under his desk if the bomb was being dropped…BTW again, if you are not familiar with Black, he is known for the many many bombs he drops…f-bombs!

I am a retired radio exec. I've worked at major stations in Philadelphia, Washington, D.C. and Miami. That was then. This is now: I've published seven books and this blog thingy. Need to know more? Really? Okay, I bare/bear all at http://marckuhn.com The other links are for the websites of each of the books I've written. I've been busy! Hope you'll stop by and check them out. Thanks for your interest!
View all posts by Marc Kuhn →
This entry was posted in communication, Family, history, politics, Uncategorized, whimsy and tagged 1950s, atomic bomb, bomb shelter, cold war, Edward R. Murrow, facebook, linkedin, Nikita Krushchev, nuclear bomb, pinterest, robocalls, school children, the bomb, tweets, Walter Cronkite, war, world tension. Bookmark the permalink.

2 Responses to FEARING THE BOMB….AGAIN!