Guest Correspondent, Ron Carmean, finishes out the week on marc’s blog with a look at one of, if not the favorite actor on most movie-goer lists…

How popular is Tom Hanks?  His films have earned $4.3+ billion, worldwide.  On the entertainment website www.Imdb.com he has 828 pictures available.  Meryl Streep has 805; Steven Spielberg has 650.  (Okay, George Clooney has 1,069 —but George is on speaking terms with the Pope and lives in a different zip code.)

Here is a critic’s opinion:  “Tom established himself as one of the finest and most respected actors of his generation, as well as the nicest guy in show business.”  I could go on, but you see my point.

Tom Hank’s career began when he co-stared in a TV series, “Bosom Buddies” (right), where he and a friend dressed as women to obtain an affordable apartment.  It was 1980.  It was a different time. Then came guest appearances on TV comedies: Happy Days, Taxi, and Family Ties.  After Ron Howard ended his happy days and switched sides of the camera for even happier ones, he gave Hanks a part in the film, Splash.  It was a smash.

Four years and eight films later, he starred in Big. And suddenly, he was.  Big was the story of a 13-year-old boy who dropped a coin in an arcade fortune-teller machine and wished he was grown up.  The next morning he was, and the movie took off from there…as did Tom Hank’s fame which has not ceased in 28 years.

Awards flowed in:  5 Oscar nominations (one for Big) for Best Actor and 2 wins;  8 Golden Globe nominations, with 4 wins (the first for Big).  He won back-to-back Oscars for Philadelphia and Forrest Gump.  The only other actor to accomplish that was Spencer Tracy.

Between 1992 and 2000, Hanks gave us:  A League of Their Own, Sleepless in Seattle, You’ve Got Mail, Philadelphia, Forrest Gump, Apollo 13, Toy Story 1 & 2, The Green Mile and Cast Away.  He won the AFI Life Achievement award in 2002 (before the Polar Express, Cars, The Da Vinci Code, Angels and Demons, Toy Story 3,  Captain Phillips, Saving Mr. Banks, and Bridge of Spies, or any of his producing efforts).  Asteroid “12818 tomhanks” is named after him for heaven’s sake. 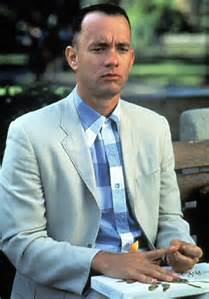 Regarding Forrest Gump, Hanks said: “When I read the script for Gump, I saw it as one of those kind of grand, hopeful movies that the audience can go to and feel…some hope for their lot… I got that from the movies a hundred million times when I was a kid.  I still do.”  Who speaks like that?  I mean seriously, who?  That’s the most All-American thing I’ve heard since Lou Gehrig’s farewell speech.

He has been in two dozen films that I think are really good.  Some are flat out great.  I mentioned some above, and I forgot to include Saving Private Ryan.  His first film salary was $70,000; for Forrest  Gump, he got $70,000,000 (gross and profit participation).  I can live with that.

What’s left for Tom Hanks?  He is happily married with four kids (Colin Hanks is his son); he’s worked with Steven Spielberg on four films; was elected Vice-President of the Academy of Motion Picture Arts and Sciences; and has to be “rich beyond the dreams of avarice.”  Dr. McCoy, in Star Trek III: The Search for Spock, said that, I think.

In 2014 Hanks was among the annual Kennedy Center honorees, but wait a minute!!  What about The Presidential Metal of Freedom–the highest civilian award of the United States. He does not have it. Who does?  In film, Steven Spielberg, Meryl Streep, Sidney Poitier, Barbra Streisand, John Wayne, Gregory Peck, and others —but not Tom.  OKAY!  He does not have it, but in the words of Alexander Hamilton (on Broadway): “Just you wait…Just you wait!”

Oh, I almost forgot. Tom Hanks’ birthday was just yesterday, July 9th.  He has reached the big 6-0.  Send him a card.  He would like that.

I am a retired radio exec. I've worked at major stations in Philadelphia, Washington, D.C. and Miami. That was then. This is now: I've published seven books and this blog thingy. Need to know more? Really? Okay, I bare/bear all at http://marckuhn.com The other links are for the websites of each of the books I've written. I've been busy! Hope you'll stop by and check them out. Thanks for your interest!
View all posts by Marc Kuhn →
This entry was posted in WHATEVER! and tagged A League of Their Own, Apollo 13, Big, Bosom Buddies, Bridge of Spies, Captain Phillips, Forest Gump, movie stars, movies, Philadelphia, Polar Express, Saving Mr. Banks, Saving Private Ryan, Sleepless in Seattle, The Da Vinci Code, Tom Hanks, Toy Story 3, You've Got Mail. Bookmark the permalink.