Today’s posting is sort of a mini-newscast. I don’t have anything major on my mind to discuss, but I do have a lot of little things that have been buzzing around. So, live, from Marc’s Blog, here’s mini breaking news…

I am going to Barcelona in the fall! Yeah, the one in Spain. One of my local supporters called me two weeks ago to tell me how much he enjoyed Anchor (now available at amazon.com) and while I soaked up all his flattery he mentioned that he and his wife, along with 19 others, are taking a cruise in the fall and he suggested that Rosemarie and I should join them. It’s partially what they call a “repositioning” cruise, I think. That’s when a ship is changing ports of origin for its cruises and it’s usually a significant distance from the old port to the new one. A lot of these kinds of cruises are seasonal as the cruise lines maneuver certain ships to specific locations and there they stay for several months (winter and summer). So this cruise we sign up for begins in the fall and originates in Barcelona. It stops in Cartagena for a day, then crosses the Mediterranean and stops off at Agadir, Morocco. After that it’s off to the Canary Islands and after that…the repositioning: seven days across the Atlantic straight home to Fort Lauderdale, Florida where we live. There are people who may not enjoy seven days at sea with no stops along the way, but I really like it. I’m lazy…I like to sit on my butt, watch the water, wave to an occasional passing mermaid and nap and read and nap and eat and eat and eat. Cool.

So from the cruise, we segue to the next mini-news event. I am soon to be the proud owner of three computers. I ordered a laptop last week. Believe it or not, it was sort of an impulse buy on…ah, guess I gotta say it…QVC. Rosemarie was watching when I wandered in and got seduced into ordering this really good deal on a laptop. I had already thought about getting one so I’d have something on which to keep up my blog while on the cruise….like I’ll be away for over two weeks.  See, it all fits together.  I will take lots of pictures and cover all the stuff we do and eat and eat and eat. So that’s another activity that will keep me busy while at sea for seven days. It’s a huge, modern ship and I will attempt to cover it all in my postings. I’ll be a friggin’ reporter for cry’n out loud.

And speaking of writing…the comments I’m getting on Anchor have been very positive and I appreciate everyone who has left a few words on the book’s amazon page. In the meantime, I will drop just a mini-hint that book #7 is already in the works and it will be entirely different from anything I’ve done.   It’s a novelty book full of retorts you wished you had said when somebody “zinged” you. I expect to build a series out of the concept. The first one is geared toward relationships and has some really nice insults that daters can use when they’re ready to dump their annoying mates. The book will consist of stick figures and “call-out” bubbles containing the brief, bright and brilliant witticisms. And this one is a family effort. My granddaughter, Lindsay, posed for the cover and my great niece, Shannon, is doing the artwork inside. And I promise you, nobody gets killed in this book…although didn’t someone say words can kill?

And finally, I spent several hours the other day attempting to change the appearance of Marc’s Blog. I must have plugged in a gazillion templates but nothing said “Wow!” So I wound up making only a change in the header. Sometimes things are best left alone. It’s that old saying “if it ain’t broke….”

And that’s all the news today…maybe next time I’ll add some weather and sports. 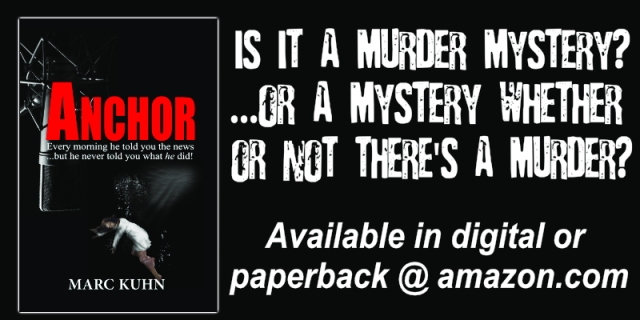 I am a retired radio exec. I've worked at major stations in Philadelphia, Washington, D.C. and Miami. That was then. This is now: I've published seven books and this blog thingy. Need to know more? Really? Okay, I bare/bear all at http://marckuhn.com The other links are for the websites of each of the books I've written. I've been busy! Hope you'll stop by and check them out. Thanks for your interest!
View all posts by Marc Kuhn →
This entry was posted in WHATEVER! and tagged Barcelona, blogging, blogs, book, breaking news, computer, cruise, insults, laptop, news, newscast, travel, writing. Bookmark the permalink.