The first history lesson taught to most true red-white-and-blue-blooded kids tells the story about the country’s Founding Fathers gathered together at Independence Hall in Philadelphia on July 4th, 1776. There they signed the document that declared our unalienable Rights, among them: Life, Liberty and the pursuit of Happiness.

Philadelphia is my hometown and I’m proud of it. I’ve been to Independence Hall many times. I’ve touched the Liberty Bell. I’ve walked the same streets as Jefferson, Franklin, Adams, Washington, Madison and all the other brave men who risked their lives to ensure our freedom.
The city reeks of American History and there is no greater launch pad for all of it than Independence Hall. In fact, you could say it is inside the walls of this great building where American history begins.

The building stands today appearing as much as possible as it did that hot afternoon back in 1776. You can almost shut your eyes and hear John Adams arguing with Thomas Jefferson as the great Declaration was being debated. Go visit Independence Hall. The building leaves you feeling the same reverence you would experience after visiting the White House, the Statue of Liberty or the battlefields at Gettysburg.

However, sometimes stepping away from something for a while and then returning with a new perspective allows you to notice things that previously went unseen. This is exactly what happened to me after two visits I made to my hometown this past year. I happened to walk by Independence Hall in the nighttime. I could not believe what I saw…or, actually, what I didn’t see. This great historic landmark was bathed in darkness almost as if it were some old abandoned warehouse unworthy of attention or concern. It made no sense to me. I was actually embarrassed for my city that it had let something like this happen.

True, I’ve seen pictures of Independence Hall somehow illuminated at night, but that apparently, like the building itself, is all history now. The outside of the building remains dark these days. I wrote a brief note in the “contact” box on the Hall’s website, inquiring why the building is not lit at night. I received a nice response, but was given a ridiculous explanation. It seems the folks who run the place are attempting to make the building appear as it did in colonial times, with various inside lights seeping out through the windows onto the dark sidewalks as if the Continental Congress were inside busily at work founding our nation. Well, I suppose that may be accurate staging 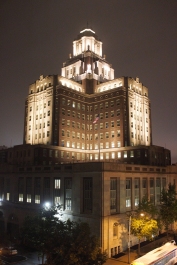 for the 1700s, but no one, I dare say NO ONE, would even think that was the dramatic scheme of things upon strolling past Independence Hall at night in the year 2015. The conspicuous observation today would be that the building is simply…dark!

A few blocks away is the United States Customs House, a massive structure built in the early 1930s. It takes up most of a city block and soars 17 stories. It is brightly aglow all night long, as you can see in the picture on the right.  Wanna bet how many people even know what this building is. And, certainly nothing has ever gone on inside its walls to remotely compare with the events at Independence Hall.

Something is wrong in the city of Philadelphia and I cannot understand why others have not raised this issue. But it is not Philadelphia alone that should shoulder the responsibility for the proper treatment of Independence Hall. Our nation was founded inside this building and it is the entire nation that needs to renew the respect to its cherished sanctity. It is an insult to allow Independence Hall to stand in darkness each night while an apathetic nation remains asleep at the switch.

I am a retired radio exec. I've worked at major stations in Philadelphia, Washington, D.C. and Miami. That was then. This is now: I've published seven books and this blog thingy. Need to know more? Really? Okay, I bare/bear all at http://marckuhn.com The other links are for the websites of each of the books I've written. I've been busy! Hope you'll stop by and check them out. Thanks for your interest!
View all posts by Marc Kuhn →
This entry was posted in WHATEVER! and tagged American History, Founding Fathers, history, Independence Hall, Landmarks, lights, Philadelphia, U.S. History. Bookmark the permalink.